** UPDATED - 12/01/17** LITTLE ROCK BLACK POLICE OFFICERS ASSOCIATION MAKES ANOTHER COMPLAINT TO CHIEF BUCKNER - WILL IT BE IGNORED LIKE PREVIOUS ONES?

An email sent earlier this week by troubled City Manger Bruce Moore to Mayor Stodola and the Board of Directors reveals more problems with the Little Rock Police Department and its recruiting process.

This latest issue follows on the heels of a complaint the Black Police Officers Association sent to the Board of Directors back on July 5th and a grass roots group called Citizens for Credibility and Truth in Little Rock Leadership seeking the resignation or removal of both Moore and Buckner. 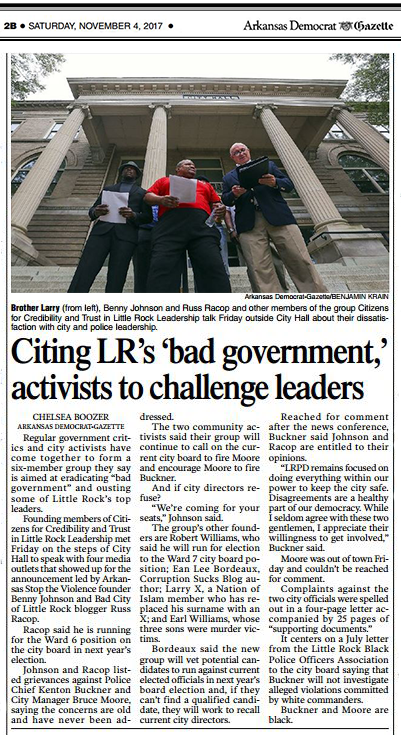 We are in the process of obtaining a screenshot of the LRPD cadet's Facebook page on which the racial remark and image were posted as well as a copy of the letter the BPOA sent to Bruce Moore.

We have obtained a copy of the post made be LRPD recruit that was the subject of a complaint made to LRPD Chief Kenton Tremar Buckner by the Black Police Officers Association earlier this week. 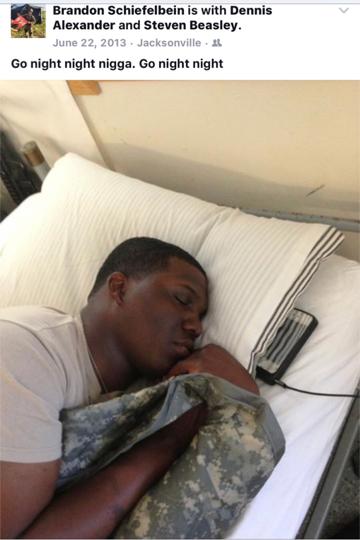 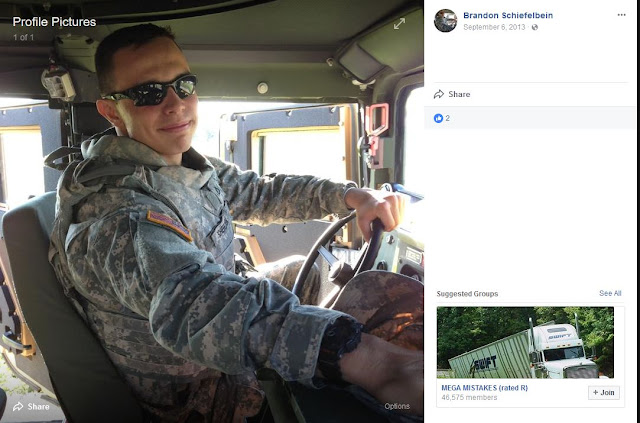 Schiefelbein has two Facebook pages that we know about. 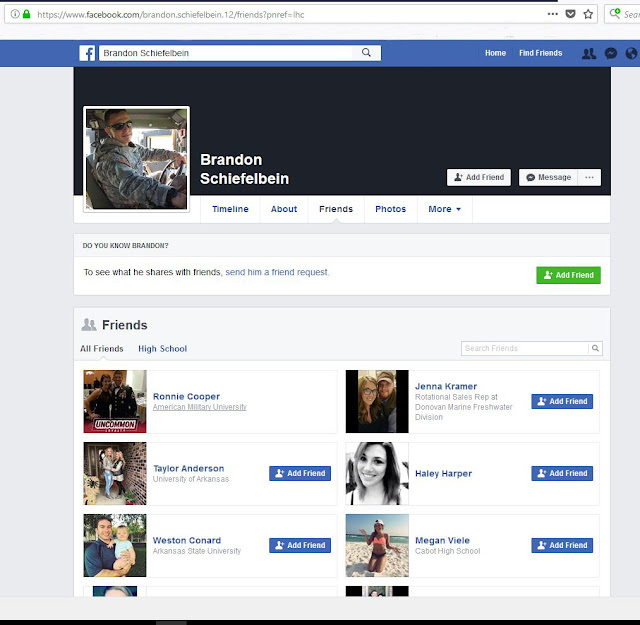 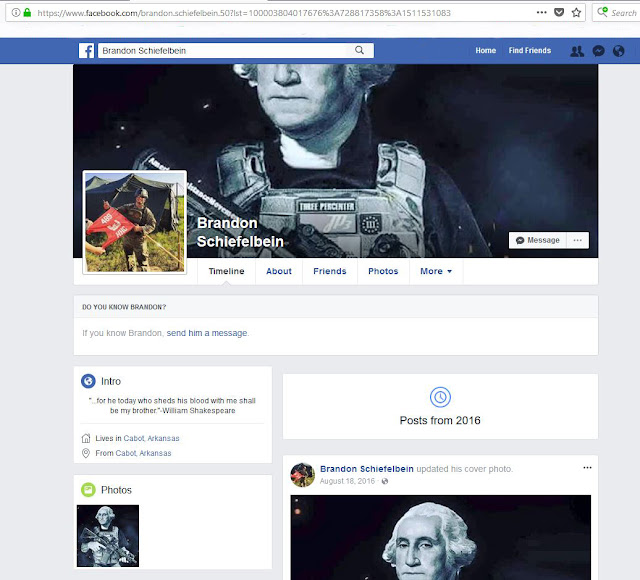 From the profile photo, the post was apparently made on the page https://www.facebook.com/brandon.schiefelbein.50 .
Even more disturbing, if that is possible, is the fact that Schiefebein is member or supporter or two fringe groups - 3 Percenters and American Resistance Movement.

Yesterday, we emailed a FOI request to Chief Buckner for a copy of the letter the Black Police Officers Association sent to him.

This was his response. 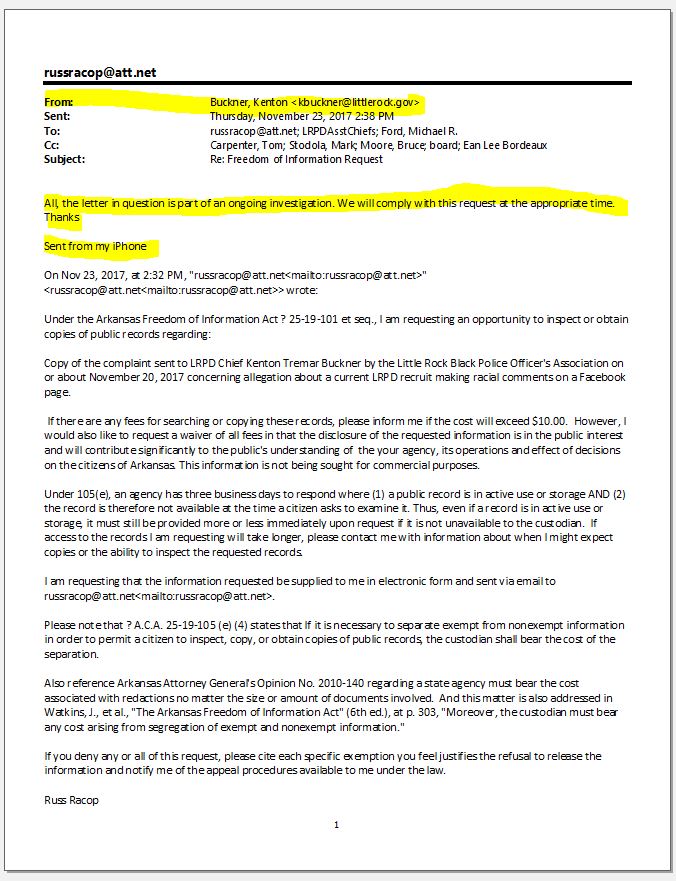 We sent an email to confirm that our FOI request was denied. 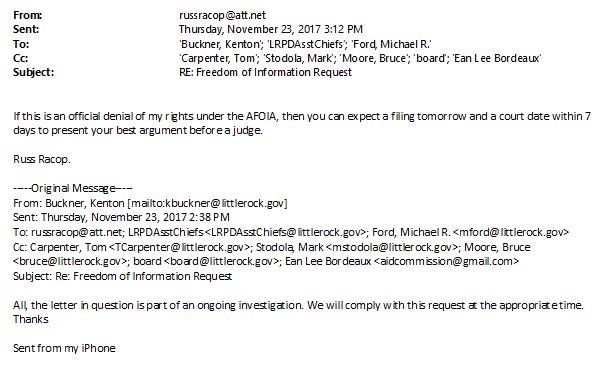 We responded to Tom's attempt to neuter Buckner's flippant remarks. 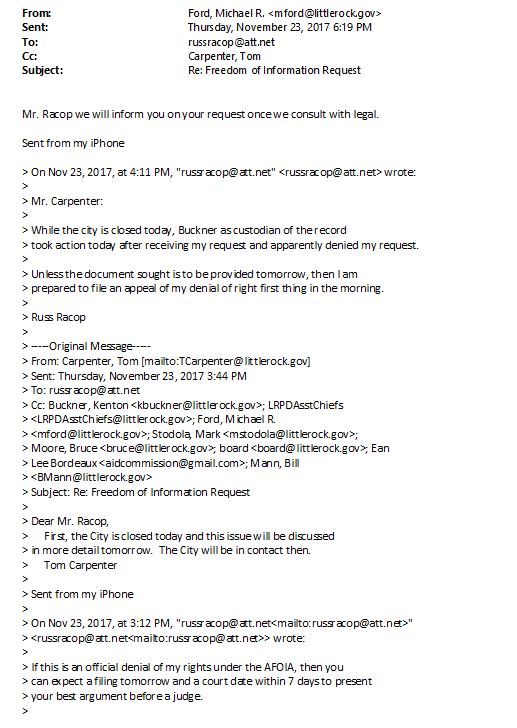 We responded in kind. 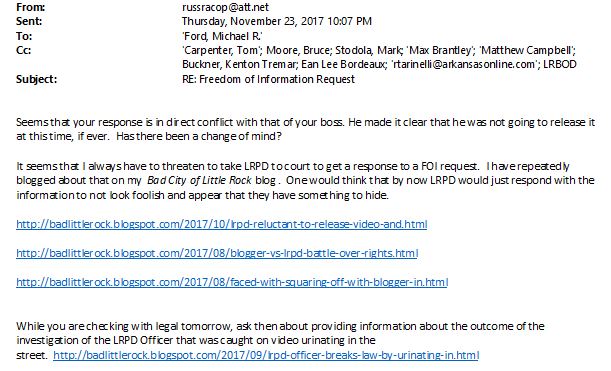 Things should get interesting today.  The city is behind is responded to a previous FOI request and they will be hit with several new ones today.

Schiefelbein has no place on any police force, especially not LRPD. Not with his racial bias and affiliation with those far right extremist groups.

We join the group Citizens for Credibility and Truth in Little Rock Leadership and demand the immediate resignation of LRPD Chief Kenton Tremar Buckner and City Manager Bruce Moore.

As expected, LRPD had to cave in and provide the information we requested.

Here is the letter that the BPOA sent Chief Kenton Tremar Buckner. Word is that City Attorney Tom Carpenter had to set them straight. 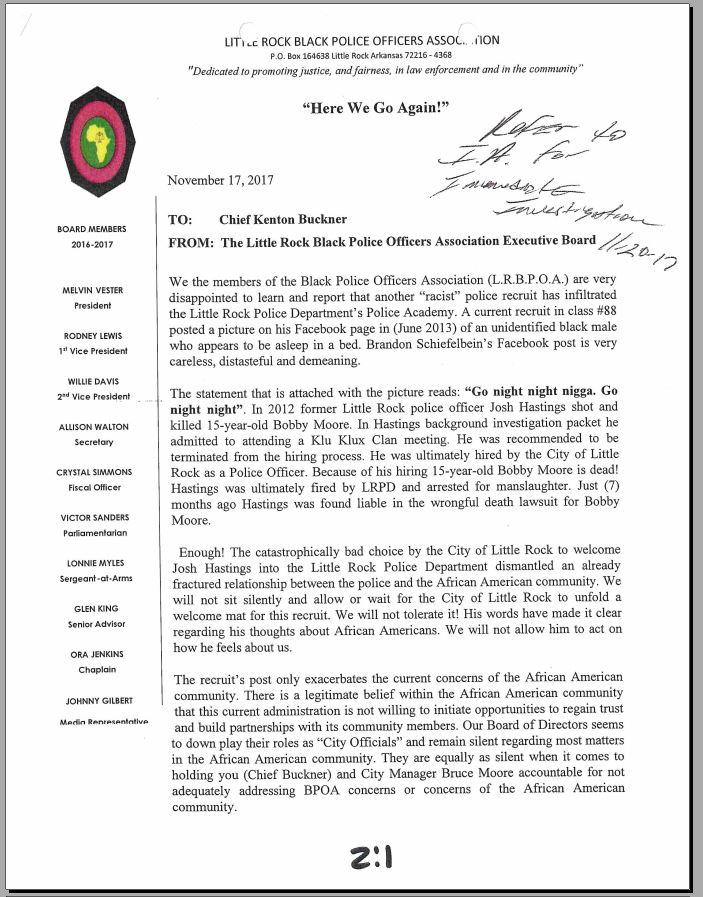 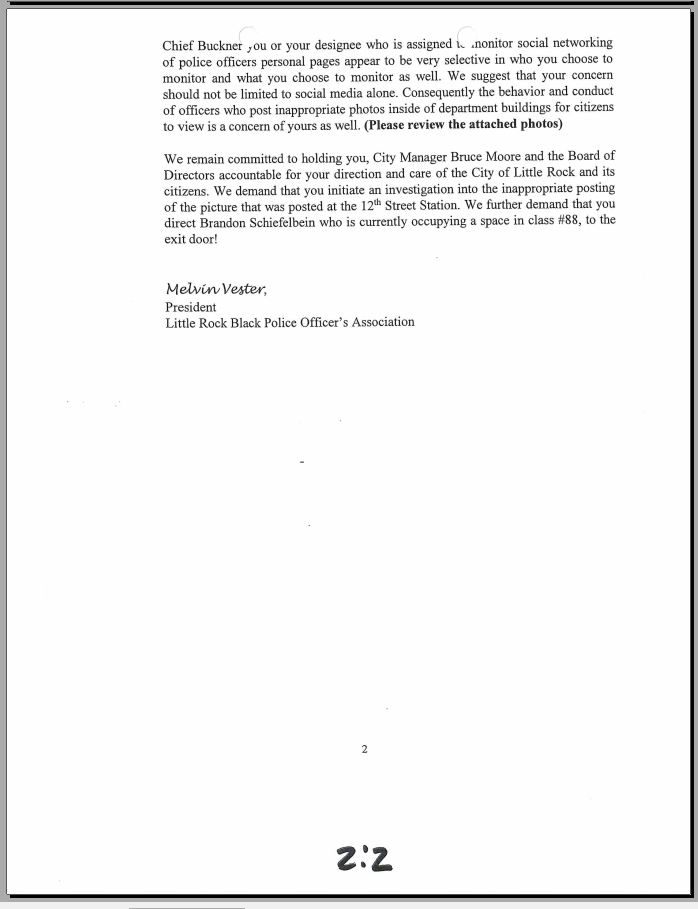 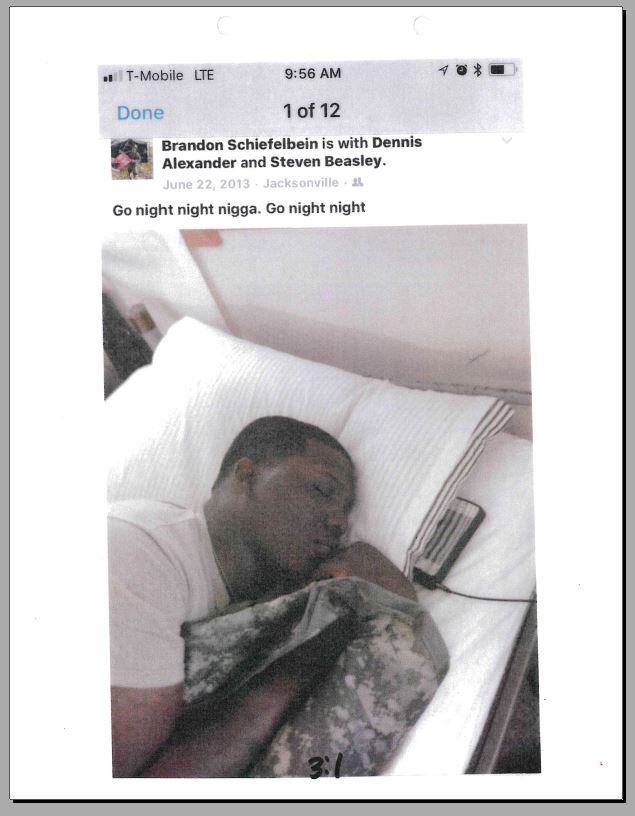 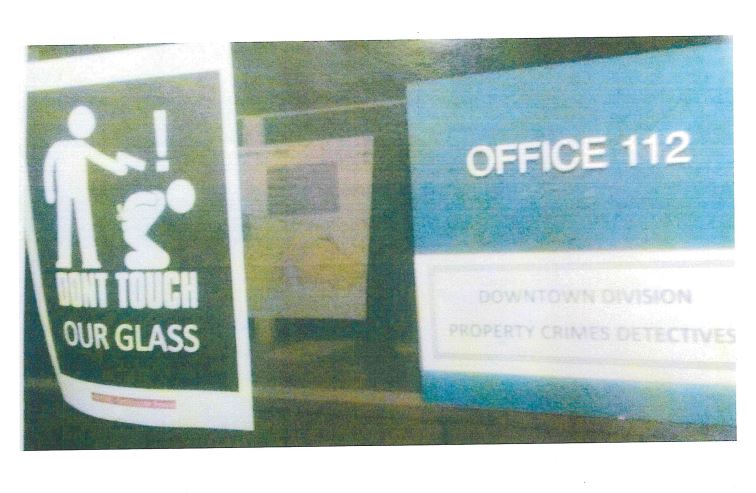 Maybe next time Buckner and his minions will think twice before they flippantly respond to a FOI request.  We won't hold our breath.

LRPD issued a "resonse" after the other news media sources picked up the story we broke yesterday.


According to information we obtained yesterday evening, the LRPD and city of Little Rock are waffling on decision to fire LRPD recruit that made racial post and is affiliated with 2 right wing extremist groups after threat of a lawsuit by Robert Newcomb, a Little Rock employment attorney.

The city is now concerned about  Schiefebein's First Amendment Rights to post racial things on social media when they routinely violate those of actual citizens of the city (Schiefebein lives in Cabot).

They don't seem to care that this matter has caused other LRPD recruits, especially the black ones, to have concerns about their fellow recruit and create and hostile work environment.  Word is that several confronted him after this matter was in the news.

In fact the publisher of this blog has been blocked by LRPD from being able to post on their social media pages and cannot provide a reason why.

The Arkansas Military Department ("AMD") is investigating Schiefebein as he is currently an active member of the Arkansas National Guard.  Posts like the one he made back in 2013 violate military standards and are actionable.  He affiliation with those two extremist groups are of an even greater concern according to a confidential source within the AMD.

A photo from a November 20th article in the Arkansas Democrat-Gazette shows Schiefebein and his left arm is covered by a flesh colored sleeve to hide tattoos on his arm.

Are his tats reflective of his racial values and belief's and thus LRPS made him cover them up?

The racial post made by LRPD recruit Schiefebein and his affiliation with at least two right wing extremist groups reflect on his core values and beliefs. Values and beliefs that are contradictory  to those of the Little Rock Police Department and the city of Little Rock. 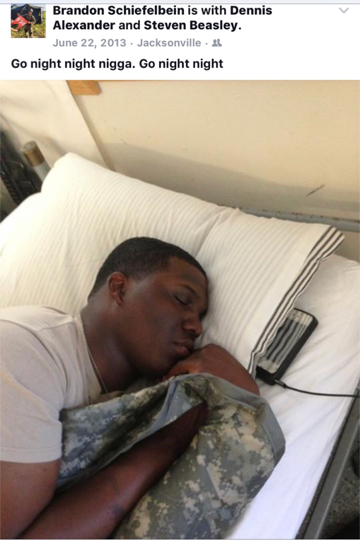 This post has created an atmosphere of distrust among black recruits in the class with Schiefebein, and while it was posted in 2013, it is still a concern in 2017.

Arkansas is an “at will’ employment state and LRPD needs no reason to terminate the employment of any individual, especially one on probationary employment as is Schiefebein.

If city attorney Tom Carpenter has concerns about the city being able to successfully defend any action Schiefebein might bring against the city if he is fired, then we suggest that the city hire outside counsel to defend the city (Stephen Morley comes to mind as a successful litigator).

If Schiefebein is not fired, the tarnished reputation of the Little Rock Police Department will drop down another rung on the ladder of respectability  and the racial divide of the city will widen.